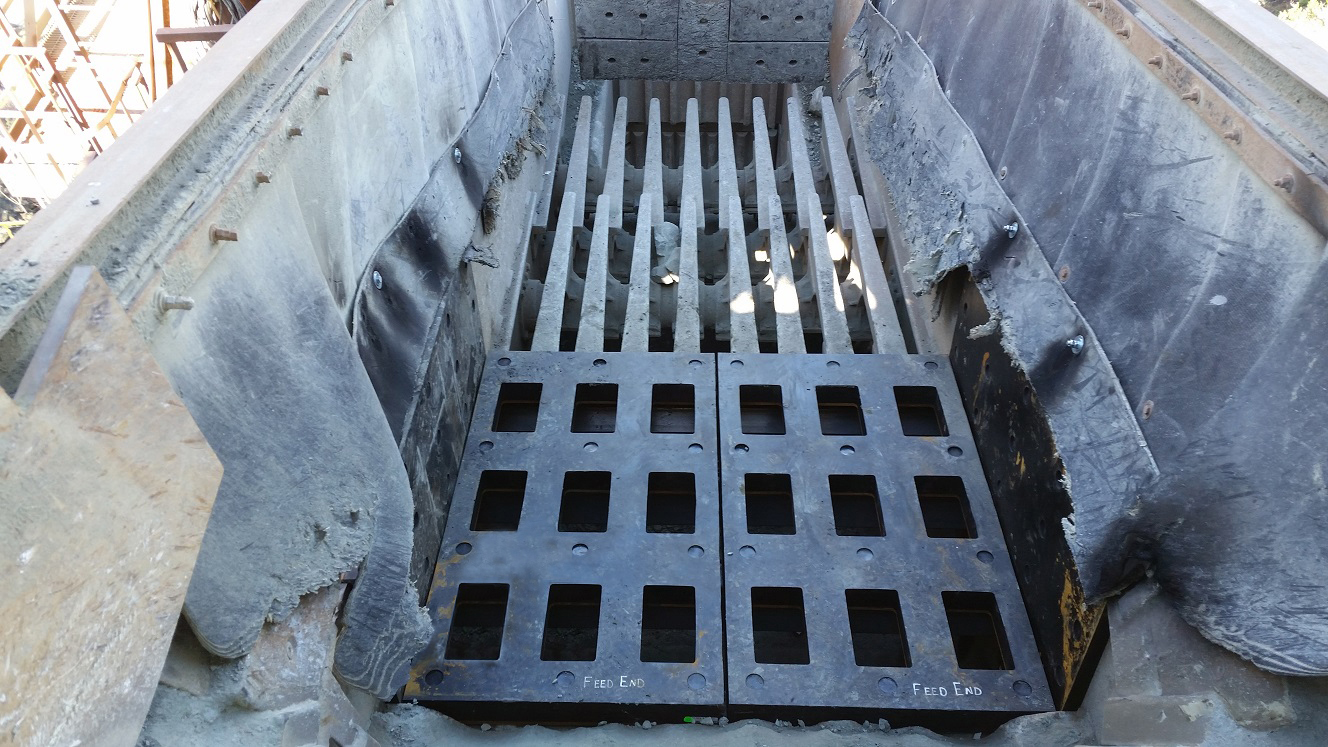 Efficient scalping is essential to the optimum performance of primary and secondary crushing circuits. To increase scalping efficiency, the Hanson operation installed Armadex custom rubber sections to the second step - with the third step soon to follow.

Quite simply, production capacity and wear life increase when fines are removed from the primary jaw feed; when overs are fed to the jaw; and when material sized below jaw crusher settings pass through the grizzly bars for further crushing and sizing.

However, in extremely abrasive, high-impact, high-wear applications, achieving the optimum scalping efficiency can be challenging.

To lower operating costs per ton while meeting market demand for high-quality asphalt and concrete aggregate, Lehigh Hanson's California-based Clayton Quarry sought to eliminate any existing or potential bottlenecks throughout its plant. Serving the San Francisco Bay region, the Clayton Quarry is one of 200 aggregate production sites and distribution terminals owned by Hanson, which produces aggregate, asphalt, ready-mix concrete and other building materials throughout North America.

“Our pit is a drill-and-blast hard rock quarry that was started in 1956,” says Marc McNeil, plant manager of the Clayton Quarry. “Since the late 1990s, our focus has gradually shifted from base rock production to crushed stone and manufactured sand, and our aging plant required some upgrades from initial feed to product finishing.”

Ultimately, the Clayton Quarry chose a customized scalping solution designed and manufactured by Polydeck. Armadex is a custom rubber screening product that was applied in bolt-down sections to the first step (5 ft.) of the plant’s vibrating grizzly feeder.

“Since installing Armadex, we’ve significantly cut maintenance downtime and wear costs – to the point where we eventually applied Armadex to the second step of the grizzly, with plans for installation on the third step currently underway,” McNeil says.

The Clayton Quarry mines a diabase rock that is hauled down to the primary crushing plant and loaded into a 150-ton hopper.

To cut maintenance downtime and wear costs, a custom rubber screening product, Armadex, was applied in bolt-down sections to the first step of the grizzly.

A pan feeder takes the 24-in.-minus topsize material from the hopper and feeds it to the vibrating step grizzly. The grizzly is highly impacted, as material drops 12 ft. before hitting the grizzly bars. The impact on steel media generated considerable noise while also causing the feed end of the grizzly to wear excessively.

In addition, the fine feed from the pit often caused the first set of grizzly bars to bridge over.

“The bars are bolted to a support bar, but with the bridging and the excessive wear, the bars would start to move and open up, allowing larger rock through,” McNeil says. “When that oversize rock gets through to the secondary circuit, the cone crusher becomes less effective.”

Most important, additional maintenance downtime and labor costs came into play. The movement of the grizzly bars required up to 20 hours per week of welding to secure them into place, McNeil says.

“For safety, working on a grizzly requires being harnessed,” he adds. “So if a worker is welding bars on a regular basis, it becomes quite challenging. We tried replacing the entire set of bars and it was very costly. There had to be another way.”

Throughout its finishing plant, on both wet and dry screens, the Clayton Quarry uses Polydeck modular synthetic polyurethane and rubber screen media panels.

The Clayton Quarry utilizes modular synthetic polyurethane and rubber screen media panels throughout its finishing plant on both wet and dry screens.

“We’ve had good results with their screen media products, so we asked Polydeck application engineers to assess our scalping circuit to see what could be done,” McNeil says. “They proposed using Armadex, a media highly suitable for tough, abrasive top-deck scalping applications. We decided to try it out on the first step of the grizzly – and we saw immediate benefits in reduced maintenance downtime and wear costs.”

“With grizzly bars, operations can’t adjust them unless they completely change them out or weld on them to change the apertures,” Babinski says. “Armadex bolt-in sections give us the flexibility to access smaller or larger apertures to fine-tune performance in a given application.”

“It was a simple, drop-in replacement for us with very little downtime, due to Polydeck’s attention to detail regarding the customization to our application,” McNeil says.

According to McNeil, the operation has greatly improved day-to-day scalping and sizing efficiencies by using Armadex media sections. By preventing oversize material from passing through to the cone crusher, the operation boosted crushing performance while reducing downtime.

“We’ve drastically cut maintenance costs, as we have yet to change out an Armadex section since their installation – and they require no weekly welding,” says McNeil, adding that the media sections on the first step of the grizzly have processed a material throughput of nearly 3 million tons over three production seasons.

The Clayton Quarry continues to work with Polydeck to further fine-tune performance. The scalping circuit will employ round apertures in the Armadex sections used on the third step of the grizzly feeder, increasing throughput of angular rock that may become wedged in square or rectangular openings.
By tweaking scalping circuits at the top of the chain, those that follow see less wear and tear, higher production capacities and more saleable products through to the stockpiles.

Written by Carol Wasson, veteran freelance writer for the aggregate and construction equipment industries.Contact Us