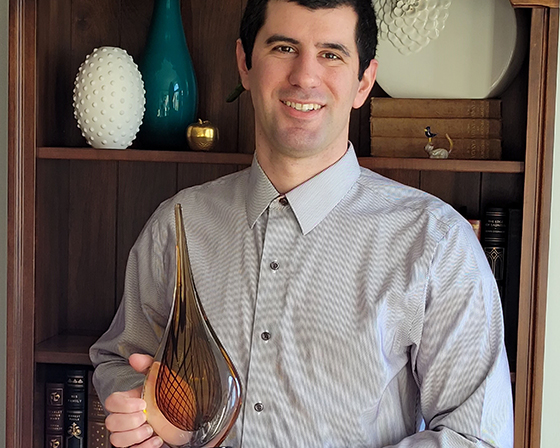 The Ontario Stone, Sand & Gravel Association (OSSGA) has named Polydeck's National Manager for Canadian Aggregates, Alex Caruana as its Associate Member of the Year for 2021. The Award, presented annually by OSSGA to one Associate Member, was created to recognize the efforts of associate members who advise, supply and support aggregate producers. The member recognized is often one who is known for productive relationships with both OSSGA members and involvement in their local community while actively shaping a positive image for the aggregate industry in Ontario. Associate Members are critical to the success of the aggregate industry, working alongside producers to provide operational advice, expertise and support.

The OSSGA Associate Member of the Year Award is typically presented at the association’s annual conference, however, due to the pandemic the conference was virtual this year. Polydeck’s Alex Caruana found out he was named Associate Member of the Year when he received a called from OSSGA’s Chairman of the Board of Directors. “It left me speechless. This award isn’t really something you’re working toward or trying to earn. However, now I can see the journey I’ve taken to get to this award. I am beyond honored,” stated Caruana in a recent conversation about the award. Caruana considers being named Associate Member of the Year quite the honor, as it requires nominations from far and wide and is a true testament to his time and investment in his career in the aggregates industry. For Caruana, the award comes with humility and appreciation for his colleagues and peers who deemed him worthy of their nomination.

Alex Caruana, a self-professed rock nerd in his own words, loves working in aggregates. He says it’s an industry that feels like a small world where you get to know everyone. Having started in the industry 15 years ago as a university student, Caruana says it’s the ultimate honor to be recognized by those he shares his work hours with. His career in the aggregates industry began when he was pursuing a Civil Engineering degree and his Dad suggested he get a summer job in construction or an industry related to his chosen field of study. He applied for a job at Dufferin Concrete and was hired as a Quality Control Technician.  Caruana enjoyed the job and kept his role at Dufferin for several summers and eventually went to work for Dufferin full time when he graduated. After several years working in the pits and quarries at Dufferin, Caruana began to have interest in working in a different capacity in the industry. This interest led Caruana to Polydeck, where he now helps customers with their screen media needs and production opportunities in the same place where he started his time in the aggregates industry more than 15 years ago.

Thanks to his experience during his university years and afterward, Caruana has an extensive understanding of what his customers require from their operations. His approach as a problem solver is evident to everyone he works with and it’s no secret that he loves his job. His ultimate goal is to take away his customers’ worries about their operational productivity and he does so with a strong understanding of their operations. Caruana works to provide solutions for his customers so they can set up their operation, forget about it, and see the results they’re seeking as quickly as possible. For Caruana, involvement in OSSGA has been icing on the cake of a career he truly loves. It’s provided connections and community involvement that further enhance his passion for helping his customers and the communities he works in. As he says, “I consider it a privilege to have a job I look forward to every single day.” Ask any member of OSSGA and they’ll likely tell you the privilege of knowing Alex Caruana is theirs, as evidenced by this award.