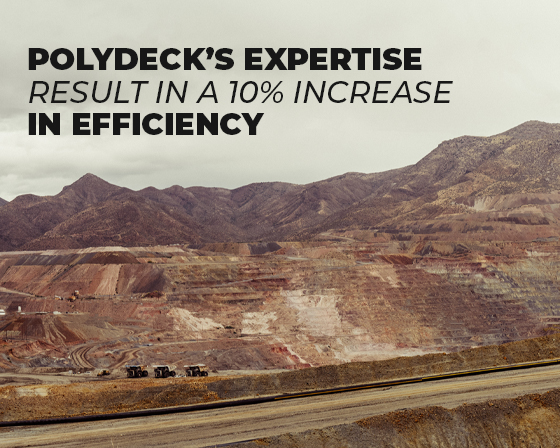 Couer Wharf gold mine is an open pit, heap leach operation located in the northern Black Hills of western South Dakota, approximately four miles southwest of the city of Lead, South Dakota. The property consists of several deposits of adjoining gold mineralization, which have been mined as a series of open pits and covers almost 8,000 acres.

The mineral processing plant at Couer Wharf was experiencing heavy blinding and plugging issues on their vibratory screens, especially with wet material or frozen conditions, which can occur often during South Dakota winters. Screen blinding was a common occurrence, according to onsite Maintenance Manager Jasmine McCauley. Feed material would cover the screen media and blind over, which made it very difficult to achieve production targets. Couer Wharf leadership began to search for alternatives, knowing there had to be a way to solve the blinding and plugging problems and return the operation to target production levels.

Initially, Couer changed to competitor screen panels to increase the tonnage on their Tabor heavy duty incline screens, but it resulted in a decreased percentage of material passing through the deck. Gold recovery was negatively affected, as well. Wire-cloth screen media was installed, but the short lifespan of wire increased downtime; this, combined with employee safety risk exposure to change out the large, sharp wire sections, eliminated the wire option as a practical solution. According to McCauley, Couer had never worked with Polydeck before, but a Foreman on the site was familiar with the products and initiated contact.

Polydeck’s Mining Expert, Sam Durnavich, visited Couer Wharf to learn about the operation, production goals, and challenges the site was experiencing with its current screening set up. Upon completion of his research of the Couer mineral processing operation, the Polydeck Team worked on creating a custom solution to help the operation reach their goals and mitigate the costly plugging and blinding inefficiencies. Using a combination of Dmax, Maxi, and other specialized Polydeck panels, the team worked to maximize the production rate and screen media longevity. The Polydeck panels the team recommended were significantly more pliable than what Couer was previously using, causing a noticeable decrease in blinding along with a significant increase in saleable tonnage and throughput rates. By switching to Polydeck synthetic screen media, Couer also experienced longer changeout periods for each panel as compared to wire screens, and reduced the necessary downtime required for changeouts. In fact, with Polydeck synthetic modular screen media panels, Coeur could plan for changeouts and reduce employee labor and exposure to safety risks due to the ease of changing the individual modular panels as opposed to the danger and complexity involved with switching large wire-cloth sections. The final step in the process is for the Polydeck expert, Durnavich, to  recommend a staged systematic changeout schedule, and Couer is now able to forecast and plan for each panel changeout. Planned downtime means Coeur is maximizing their screen media life, and their production rate is never affected by unplanned maintenance or downtime issues associated with screen media.

The plugging and blinding issues at Couer have been resolved thanks to the dedication of a Polydeck screening expert and his ability to select application-appropriate panels and setup a customized solution for their operation. According to McCauley, there was some initial trial and error, but Durnavich was by their side for the entire journey until they found success together. “You cannot put a price on our partnership with Sam. He is always willing to come to our site, listen to our issues, and make suggestions. When our first attempt didn’t solve our issue, he continued to work alongside us until it was. It’s so helpful having a vendor I can count on. Sam’s experience and ability to adapt Polydeck’s offering to our needs has been invaluable,” said McCauley.