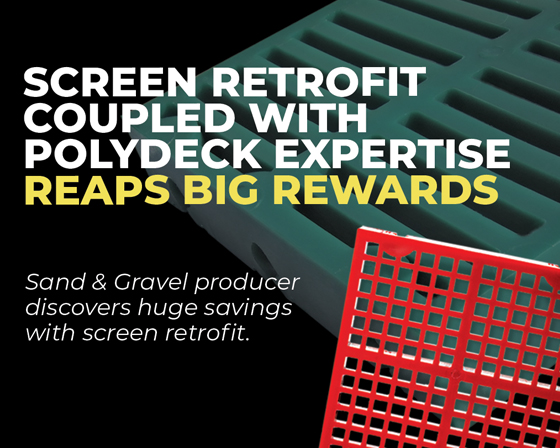 Vicdom Sand & Gravel knows full well that producing and washing aggregate is tough on equipment. The family-owned, third-generation company has been producing stone, sand, and gravel for more than 40 years in Uxbridge, Ontario, Canada, a 30-minute drive northeast of Toronto.

Vicdom’s management also knows that unnecessary downtime comes at a high cost. Until recently, the company had been encountering periodic wear issues with the 5’ x 7’ wire screen media on its two-deck, 5’ x 14’ Dillon wash screens. The screens were being used to produce +5/8" over the top deck, 9/16"-1/4" over the bottom deck, and 1/4" chip through the bottom deck. Although the screens had decent wear life and met production requirements when in operation, once they became damaged, they had to be completely replaced.

“We’d get one hole in the feed zone and have to change the whole screen, even though 75 percent of the screen is still in good shape,” says Victor Giordano, assistant manager at Vicdom, and grandson of late Vicdom co-founder Vic Giordano. “A $500 screen was now garbage.”

The larger cost stemming from the screen replacements was the downtime that came with switching out the 5’ x 7’ screen media, which Giordano says cost his operation between one and three hours of downtime each time they needed to be replaced. So, when Alex Caruana, Polydeck territory manager for Central and Atlantic Canada, explained that the company could save money and reduce downtime in its operation by retrofitting its wash screens with a modular snap-in system, Giordano wanted to learn more.

“Alex brought a diagram and did a good job in explaining what we had before with wire mesh and what we could have with Polydeck,” Giordano says. “The biggest knock on rubber and polyurethane is that it doesn’t have enough open area like wire mesh, but he showed that you didn’t lose any open area.”

“What I typically do for a plant when they're considering one or more decks is very simple. I lockout, jump on the screen or take a picture, and just count the openings. I know how big the openings are, because I’ve measured them, and that also allows me to take into account any obstructions like bucker bars, side clamp rails, any diverters, any bolts and other things of this sort. That allows me to show the customer that with their current wire cloth, they have ‘X’ open area, whatever ‘X’ may be”, Caruana explains. “And then, I am able to show them that in their application, using our media, your open area would now be “X+,” and that's their new open area number.”

In many cases, this comparison is a big eye-opener for producers.

“Even with wire cloth, they may not have had all the open area they thought they did,” Caruana explains. “Just imagine a piece of mesh screen in front of you. It's unobstructed, and its cataloged open area, or book value, might be 65%. It looks very attractive. But when you actually put it in place, there are machine parts underneath it. So, you don't really have 65%, it might be 48%. Whereas, synthetic media is not the same. When synthetic media is giving an open area, that is the gross and net number. When installed, it still has that open area. If somebody tells you that you've got 48%, then that's the number in place. So, by me doing that comparison for people like Victor at Vicdom, they have that information available to them and they can make a more educated selection.”

Vicdom decided to change over one of its wash decks with a modular snap system using 1’ x 1’ Polydeck polyurethane panels with 1/2” square openings on the top deck and roughly 1/4” openings on the bottom deck. Giordano was impressed with the results.

“This year we changed two panels, total, on the conversion,” he says. “We would have normally changed five or six entire screens. Instead, we changed two panels that cost $90 Canadian each for $180 in a year. The efficiencies are good, capacity is good, and downtime is amazing,”

The reduction in downtime with screen media change-outs isn’t the only reason Vicdom enjoys working with Polydeck. Giordano says that Caruana’s level of professionalism has been a big selling point, always making himself available to assist with any issues that occur on-site.

The company had a processing issue last year with the first conversion, so they called Caruana to discuss the issue.

“He asked, ‘Are you sure your eccentrics are running downhill?’” Giordano recalls.

So, Giordano checked with his maintenance crew and it turns out they had done some work previously that day and accidentally re-wired the motor backwards on the screen causing the eccentrics to run uphill.

“We fixed the wiring, popped the stone out and it was working again. With his knowledge we were able to fix that issue right away,” Giordano says, adding that he has a great appreciation for the technical knowledge Caruana brings with him to the job site. “I don’t see a sales guy. I see a guy with a lot of pit experience now in sales, and that helps.”

Thinking about a conversion?

Polydeck has a team of professionals and more than 40 years of experience to help you optimize your screening performance while minimizing downtime.