Myth or Fact? "You Lose Open Area When You Switch from Wire Cloth to Synthetic Media." 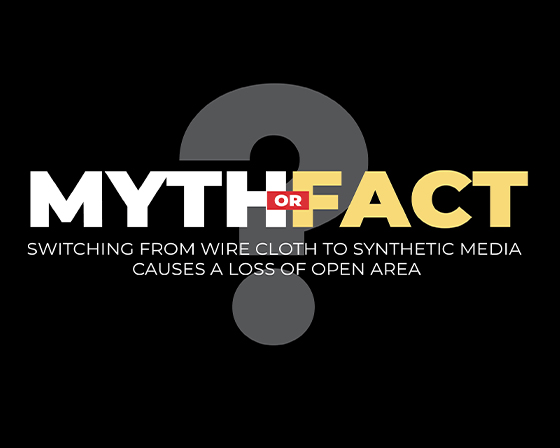 “You Lose Open Area When You Switch from Wire Cloth to Synthetic Media.”

Lots of facility operators still believe that if you switch from wire cloth to modular synthetic media screens, you will lose open area on your deck. As more producers try synthetic media, however, they enjoy greater throughput and uptime with maximum open area and extended wear life, proving this idea to be a myth.

Winter Brothers Material Company is a family-owned sand and gravel operation supplying the aggregate needs of the St. Louis area for 70 years. The two founding brothers, George “Pete” Winter and Robert A. Winter led river trips in the region during the 1930s, and after serving in World War II, they returned to the area and established the company in 1946.

Located on the Meramec River, a tributary of the Mississippi, Winter Brothers mines an alluvial deposit with unique particle shape, uniformity, and purity. “Our region is blessed with the availability of the consistent-grade gravel and the lignite-free sand deposited by nature in this river valley,” says Ryan Winter, a member of the Winter Brothers management team.

More than 70-percent of the company’s products are used in the ready-mix industry and perform well in a variety of Portland cement mixes. Products are also targeted to the roofing, masonry, asphalt, landscaping, septic systems, and extraction well industries.

At its Hagemann Plant, the facility’s main screening circuits produce six different sizes of coarse aggregates along with two sizes of sand products. “Since opening the plant, we had always used wire cloth on all the decks of each screening circuit,” says Winter, who admits that his management team had long resisted the use of synthetic media due to concerns over loss of open area and diminished production capacity.

Further issues arose with downtime due to screen maintenance during busy periods, when the plant beefs up production. Each of their decks utilized five 4-ft. by 8-ft. sheets of wire cloth, so Winter recalls that this was a critical issue for him.

“When one of those screens would blow out, we’d have to shut everything down, pull workers off of other jobs, bring in a crane, switch out the screens—all of that would take several hours out of the production day each time it happened.” Additionally, whenever a wire cloth screen suddenly blew a hole, oversize material would fall through and contaminate the product stockpiles.

So Winter, along with Plant Superintendent Steve Klahs—a 30-year industry veteran—began to take a hard look at synthetic media because they wanted to better understand the benefits and pitfalls of switching. Fortunately, they called Polydeck for advice.

After talking with several synthetic media manufacturers, Winter says that he chose Polydeck due to our expertise and professionalism, and because of his strong relationship with local Polydeck dealer, CT Fike Co.

“Dan Fike was very proactive,” Winter explains, “He brought in key members of the Polydeck team to closely examine our processes so that they could specify the right panel types for our applications and gradations.”

Joe Teague, Vice President of Sales, but at the time served as Polydeck’s Regional Sales Manager, worked closely with the Winter Brothers management team. He demonstrated to them that their concern about loss of open area lies in how “open area” is typically defined and calculated.

“Published open area percentages result in miscalculations in the specification of the screen area and vibrating screen size required for a given application,” Teague explains. “Many wire cloth catalogs list percentages of open area which figure in all the openings in a section of screen. Upon installation, however, a portion of those openings are blocked by bucker bars, crown rubber, clamp rails, and center hold-downs. This means that the open area is significantly smaller, causing calculations to be off by up to 40-percent or more.”

In the case of many synthetic media brands, the open area is often calculated by simply ignoring the border. “The traditional panel has a large border or “dead” area around the perimeter that often is not taken into account,” says Teague, “So again, that means the open area percentage is overstated for these products.”

Teague showed Winter Brothers management that when engineering firms and end-users use these inaccurate open area calculations in their plant flow analysis software, the plant may be designed with undersized or oversized vibrating screens.

Teague’s advice to them was a revelation: Open area should be calculated by taking the total number of openings in the screen panel, and determining the percentage of actual open holes versus the complete surface of the panel itself. He suggested that Winter Brothers take a very basic approach to comparing the open area between two manufacturers by simply counting the number of holes on each screen panel.

The goal was to make sure that the circuit kept pace with the crushing side, so Polydeck’s approach began by correctly matching the media to the vibrating screen parameters, selecting from our library of more than 1,500 screen panel design options.

We reviewed all the product mixes to identify any potential gradation inconsistencies and plant bottlenecks, and make any upfront adjustments. After capturing the critical processing statistics, we ran “what-if” scenarios to optimize the media specifications to Winter Brothers’ applications, and determine how any changing variables within the screening operations would affect overall efficiency.

According to Winter, “Polydeck guaranteed us that their panel configurations would allow us meet the required specifications. If not, then they would make any necessary changeouts at their cost. That gave us a lot of confidence when switching so many decks to synthetic media.”

At the end of the assessment, Winter Brothers made the decision to install Polydeck’s modular polyurethane media panels.

The Results Speak for Themselves

“Since we switched out, we have only had to replace a few panels on the impact areas. We’re very happy with polyurethane’s increased wear life because, when we were using wire cloth on those decks, we were changing out a screen or two on a weekly basis,” says Klahs.

While Klahs once thought switching from wire screens would inhibit production, he now acknowledges that the use of synthetic media is saving their operation time and money. “We’re seeing an unbelievable increase in production—nearly double— particularly on the fine sand,” he says. “In addition, the open area on the polyurethane panels gives us excellent throughput. We are particularly impressed by the open area we get on our masonry sand processing.”

For Ryan Winter, the durability and resulting labor cost savings of using polyurethane panels is the chief selling point. “Our material is very hard,” he explains, “While typical limestone is a 3 to 4 on the MOHS scale of hardness, our sand and gravel is a 7 to 8. So, while throughput and open area are important, durability is critical.”

“We’re very pleased with the years of wear life we’re getting from these panels, and the maintenance crew can catch any wear issues before they become a downtime or contamination problem. If QC samplings are slightly off, the maintenance crew knows to check for wear. If they need to replace a panel, it only takes one individual a few minutes to pop out the worn screen and put a new one in.”

“Sometimes businesses stay with the same old methods because that’s the way they’ve always done things,” Winter admits. “That’s why we stayed with wire cloth for so long. But we eventually made the switch to Polydeck’s synthetic media and we’re glad we did.”