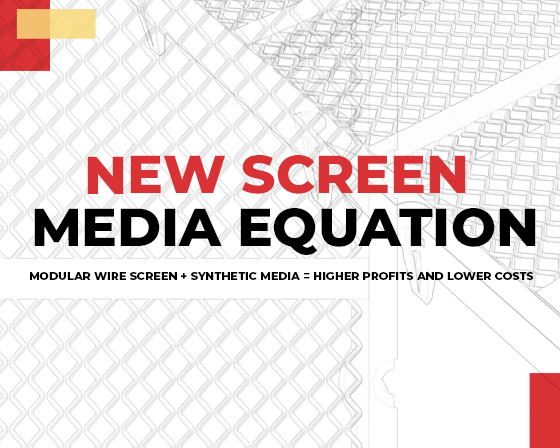 When you eliminate top-deck bottlenecks, you increase production capacity and put more saleable product on the ground. Read about how Polydeck assisted with a higher level of efficiency in a cost-effective way.

If you’re running an aggregate plant, then you know that the efficiency of your top-deck screens is critical to your operation’s overall performance. It’s a simple formula: When you eliminate top-deck bottlenecks, you increase production capacity and put more saleable product on the ground. But how can operators achieve that level of efficiency in a cost-effective way?

Polydeck’s answer to this question is a screen media equation that combines modular welded-wire screen panels with synthetic media panels. Each modular panel type is strategically-located on the top deck to deliver maximum open area and superior wear life. For operators, the result is greater throughput and reduced maintenance downtime = more profit and fewer expenses.

Brandon Genzer (Plant Manager at Alleyton’s Vox Plant in Garwood, TX, at the time) was dealing with coarse deposits at the site as well as difficulties vacating the top deck of their wet secondary, inclined finish screen, which was fitted with polyurethane media.

“The screen is being fed 2-1/2-in.-minus material,” he explains, “We had a lot of carryover of 1-1/2-in. material, which created unnecessary recirculating loads going back to the crusher.”

This was a huge problem for their operation because recirculating loads significantly increase both crusher wear and per-ton operating costs. It was sapping the facility’s profit margins by sending finished product back to the crusher instead of to the saleable product stockpile.

To eliminate this costly carryover issue, Genzer consulted with Polydeck’s manager for the South Texas region at the time, Kent Ropp. “I work closely with each producer in my area to analyze their application and create modular screen panel configurations that deliver the desired specifications.”

Ropp worked with Genzer to specify the new media by conducting several hours of run time for each sample of material. “We would plug in different media to dial in our FM [fineness modulus] to just where we needed it,” Genzer recalls.

Ropp ultimately recommended a combination of Polydeck’s high-performance products. For greater open area and throughput, Polydeck’s METALDEX™ modular steel screen media panels were installed on the discharge end of the facility’s 6-ft. x 16-ft. screen. To absorb the impact on the feed end of the screen, RUBBERDEX® synthetic rubber panels were installed for maximum top-deck wear life. The middle and bottom decks were outfitted with POLYDEX® modular polyurethane screen panels.

The METALDEX™ panels offer open area that equals or exceeds traditional wire cloth of the same aperture and wire diameter. In addition to greater open area, the modularity of the panels allows operations to apply them at the feed end or, more importantly, at the discharge end where increased open area is critical in eliminating recirculating loads.

Tests conducted by Ropp at the Vox Plant determined that the addition of Metaldex panels to the discharge end boosted screen performance to 55.9% open area over the 33.4% rating they achieved with the previous synthetic rubber panels.

“We’re getting good wear life on the panels as well,” Genzer reports, “Even under extended 12- to 16-hour shifts, the first set lasted more than four months. When we extend hours, we check the screens at the end of every shift. If need be, the crew can change out panels in a matter of minutes, and we’re back up and running.”

According to Ropp, the key to METALDEX’s greater wear life is that: “It’s comprised of abrasion-resistant AR 500 Brinell steel, which extends wear life in most applications against that of standard wire cloth. Welded wire simply delivers a higher degree of performance in strength and corrosion resistance.”

Another bonus for the Vox plant is that METALDEX™ panels scrub the material better, removing the clay content. “We’re getting the best of both worlds now—cleaner rock at a higher throughput,” says Genzer, adding that the plant averages 550-tons per hour, a significant increase since the screening circuit was fine-tuned. Alleyton has since implemented a METALDEX™ screen at another operation to help break up and eliminate the clay content in their material.

Because processing flexibility is important at the Vox facility—which primarily produces 1-1/2-in.-minus material, 3/8-in.-minus material, and concrete sand—the modularity of the screen panels enables them to easily change out panels or fine-tune configurations to accommodate varying material feeds or processing requirements. The borders of each 1-ft x 2-ft welded wire panel are encased in polyurethane, as well, making them much easier to handle than large wire cloth sections.

“METALDEX™ is another groundbreaking screen panel design from Polydeck that enhances the range of screen media solutions and help our customers beat their production goals,” says Ropp. “It offers the extended wear life of abrasion-resistant steel with the open area of wire cloth, and the modular engineering allows for easy handling and simple attachment to Polydeck’s stringer frame system.”

Eliminating screening bottlenecks is essential to maximizing throughput on top-deck screening, which is, in turn, critical to optimal plant performance. At Alleyton Resources’ Vox Plant, Polydeck’s innovative combination of welded wire and synthetic media panels was the precise formula to solve their screening problems.