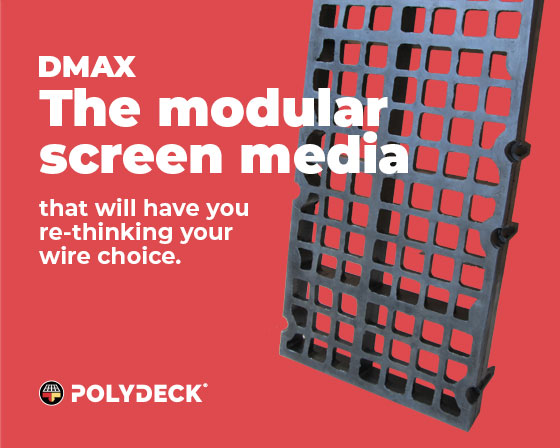 DMax: The modular screen media that will have you re-thinking your wire choice

Producers often turn to what has always worked and what they are accustomed to when it comes to selecting their screen media. While wire cloth has its advantages, wire has met its match in Polydeck’s newest offering. Meet DMax, the latest in high performance, extreme open area synthetic modular screening.

At Polydeck, we’re known for relentlessly pursuing solutions to the challenges our customers face. When your operation depends upon the performance of your screen media, nothing less than the best solution is acceptable.  DMax, Polydeck’s latest evolution in modular synthetic screen media provides so much throughput advantage, its open area rivals that of wire cloth while providing the durability and benefits often associated with modular synthetic screen media panels.

DMax is the result of Polydeck’s advanced material science technology that balances durability and high open area in screen media construction. This balance provides a better return on investment and a significant increase in throughput where DMax panels are used. Plant Manager Trulane Vanatta recalls the efficiency gained by using DMax panels at Morrison Quarry, “The increase in open area resulted in an 11% increase in the production of profitable 1-in. rock, and reduced fines by nearly 1%.” As any producer knows, even small reductions in fines paired with production increases is incredibly important to an operation’s profitability.

When producers initially began using synthetic screen media, it was in response to the durability the product offered them. DMax achieves the durability producers expect, along with a significant increase in available open area. DMax provides the perfect balance between wear life for uptime, and the health and safety benefits associated with reduced noise and fewer whole deck changeouts. Like all of Polydeck's modular synthetic media, Dmax can be changed out in small sections as screens wear, preventing dangerous and costly shutdowns for larger media changeouts, while preserving the benefits synthetics are known for.

DMax panels are fully customizable, allowing Polydeck’s team of experts to create a solution that meets the unique needs of each operation. Common opening ranges can increase open area by 25-30% against standard synthetics, frequently exceeding wire's actual available open area, which is the open area actually available once bucker bars and other dead spots are accounted for. As every producer knows, open area is directly related to efficiency, thus more open area means a more efficient operation.

A Producer using cone crushers in a closed circuit could benefit significantly from using DMax. The extra open area on the screen preceding the cone crusher allows the product to reach the pile more quickly, instead of the cones. The result is extra capacity for the cone, less fines generated overall, and good salable product to pile sooner and in higher overall splits within the plant. The extra open area provided by DMax means less dust and fines and more clear stone production. This also helps decrease cone crusher wear and reduces overall power consumption since the system is being evacuated more quickly. Reduced power consumption translates to lower operational costs both in energy costs and wear on equipment.

Polydeck’s modular technology allows for easy and safe installation of DMax with other panels and use in zones where efficiency is key. DMax is ideal for use in conjunction with heavier duty panels in feed zones in order to maximize useful available open area.

DMax offers a significant weight reduction benefit over other synthetic screen media options, which reduces component wear on the screen and increases the effect of the vibrating mechanism’s stroke on particle separation. At the end of the day, it all translates to higher production levels with reduced costs.

While there are many applications where DMax can be used, producers win with DMax where there are overall blinding issues or overloaded decks leading to inefficient screening. DMax eliminates blinding and allows for more throughput. With DMax, the right size material goes through the screens, eliminating downstream bottlenecks and increasing tonnage through the plant. When durability, true open area, and reduced downtime come together, efficiency is the ultimate result. Consider DMax, the synthetic screen media that will have you rethinking your wire cloth.